On Tuesday 5th July, a team of Year 5 and 6 girls competed in the St Barts football competition at Leeds Beckett University. The girls played against a number of teams from the Yorkshire area, who all had to qualify for the competition. Our team played with great passion and drew two of the games but were unfortunately knocked out in the group stages. Thank you to the girls who took part as they did amazing and represented the school exceptionally well. 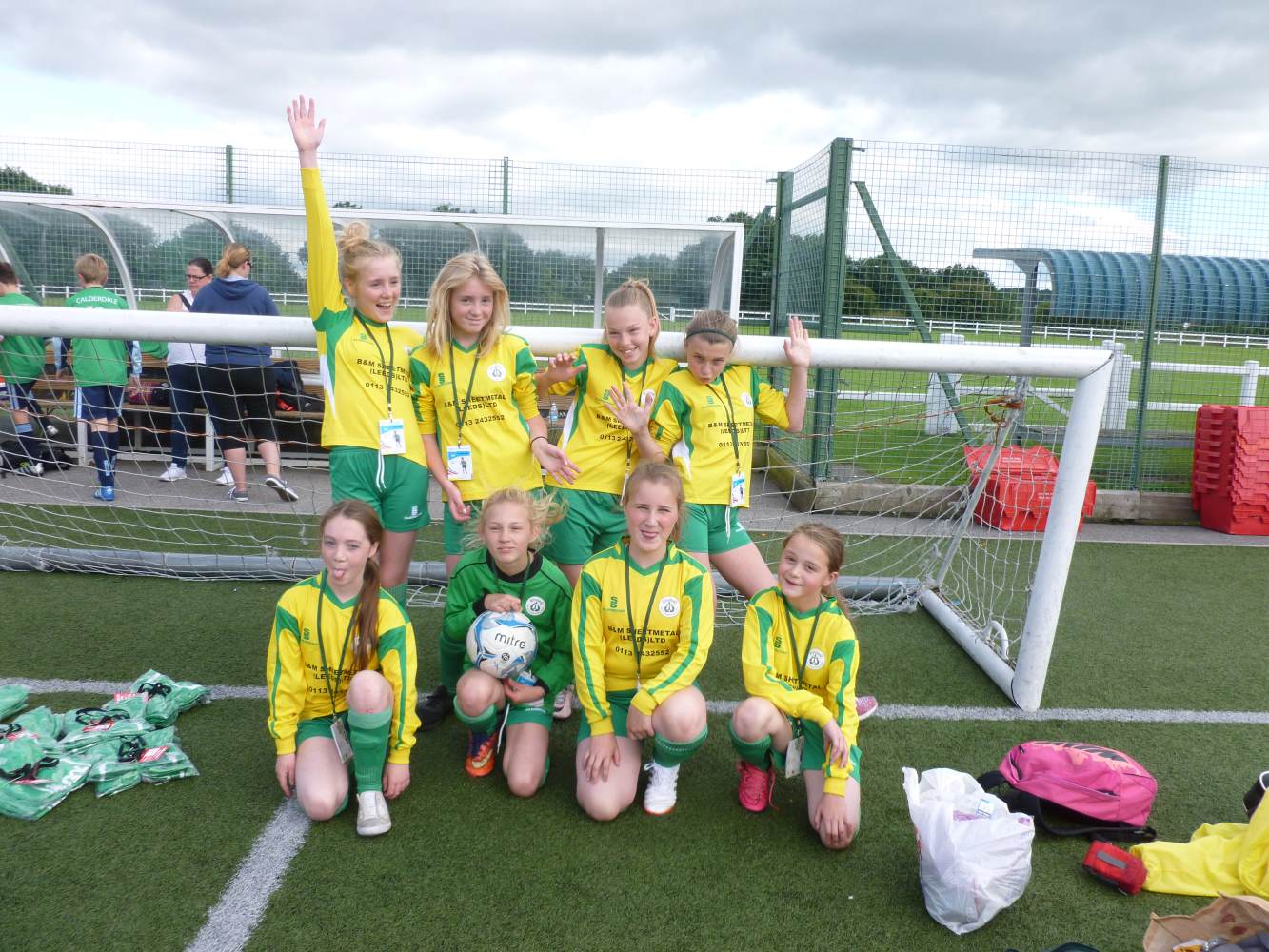 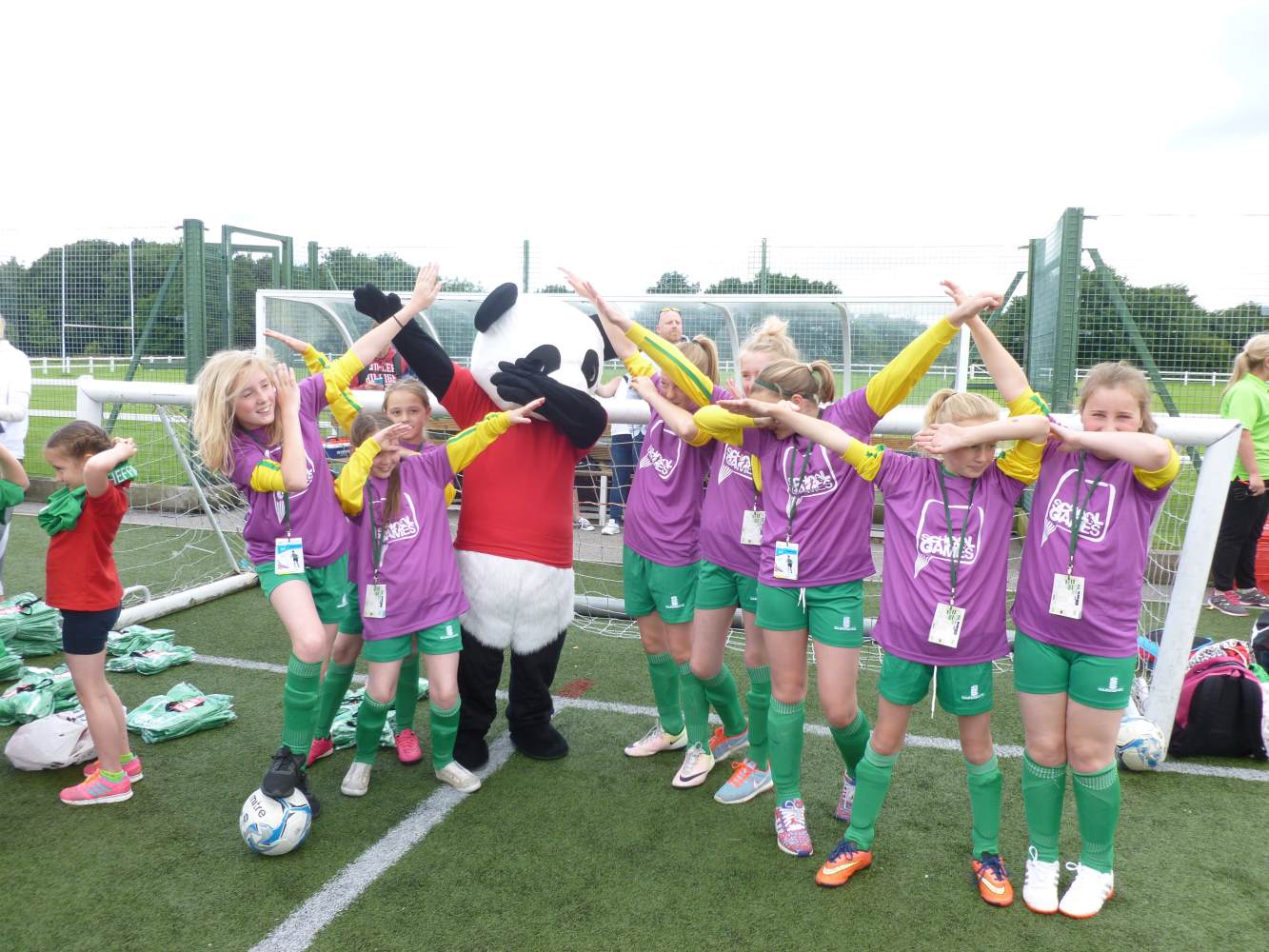 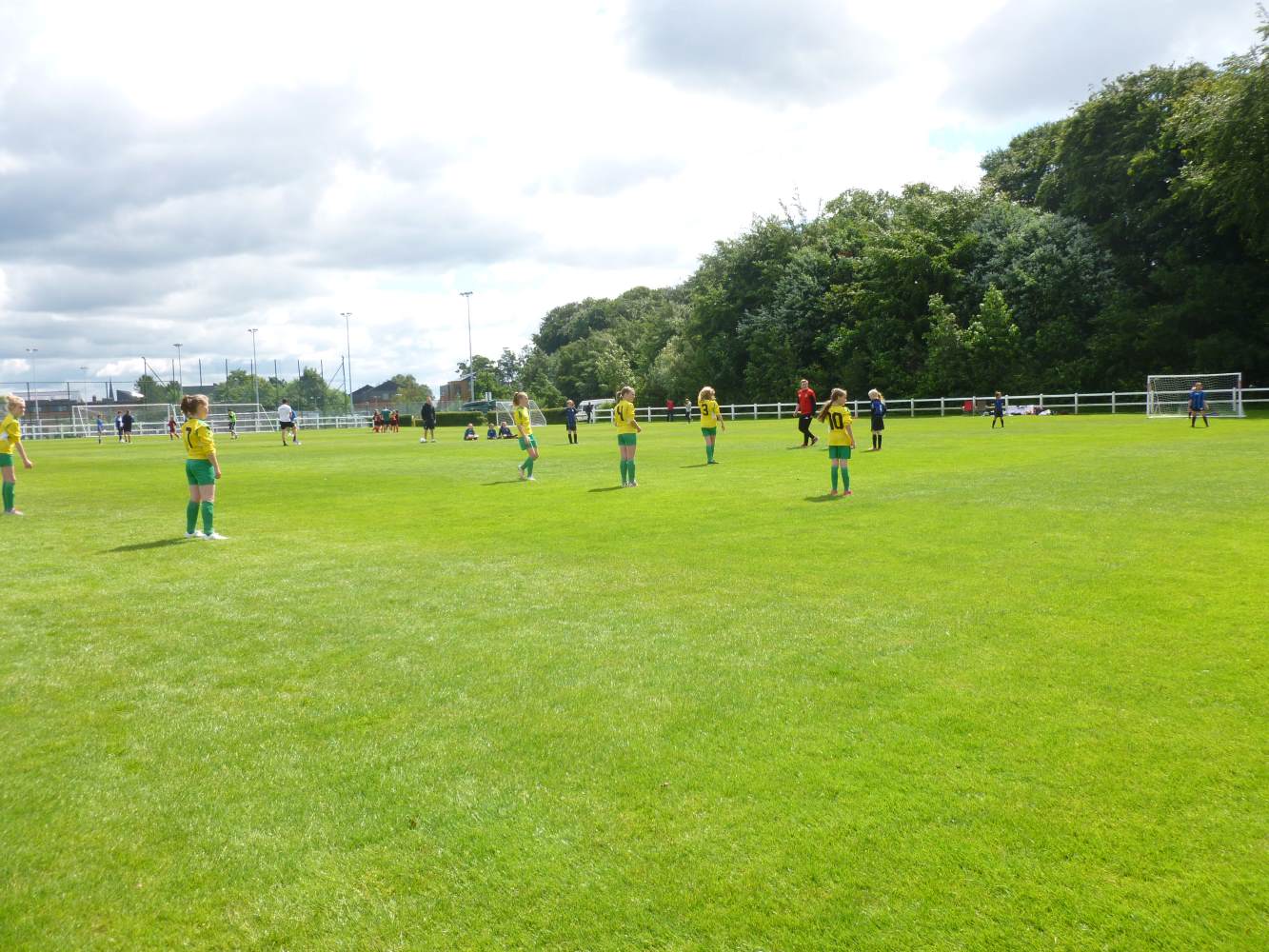 On Wednesday 25th May, children from Year 5 and 6 took part in a swimming gala against other schools in Batley. Every child made it into the finals for each race they competed in, which is a great achievement for them. There were individual successes with Callum winning bronze for breaststroke and Emily winning silver for back crawl. There was also success amongst the relays with the boys medley team coming second to earn silver and the girl's freestyle relay gaining silver too! Overall the team did fantastically well with the boys and the girls both coming 3rd in the competition. Their team spirit was brilliant throughout each race and I cannot commend them enough for the sportsmanship they showed during the gala. They all really did themselves and the school proud. Well done Windmill! 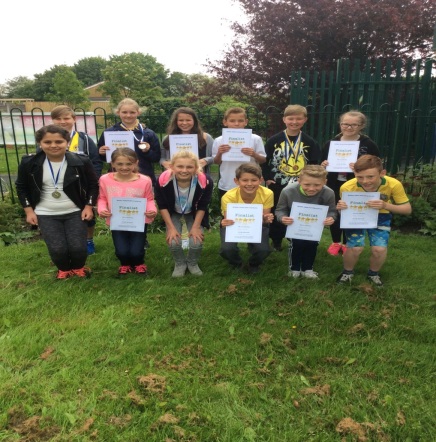 On Wednesday 18th May a team of 7 played in a tag rugby tournament at Leeds Road Playing Fields. The team first played against 9 other teams within their group to try qualify for the playoffs, which would take them through to the next round. Although they didn’t make the playoffs, they made it into the 2nd tier group to play for a trophy.

The team worked so hard and their efforts payed off by winning the trophy within the 2nd tier group. Their sportsmanship and the way they rallied each other on was fantastic and have been a credit to our school.

We would also like to say thank you to the parents for helping with transport to make the day possible. 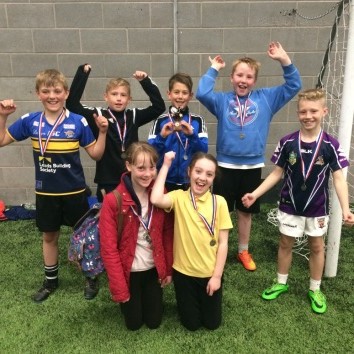 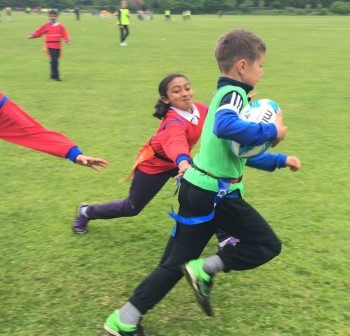 On Tuesday 26th April, children from year 3, 4 and 5 competed in a mini tennis competition. The Year 3 and 4 children competed in teams together whereas the Year 5s competed in their own team. Success was had in Year 5, as they came 3rd in their competition allowing them to continue with their great achievements from when they competed last year. It was the first time playing in a competition for the children in year 3 and 4 but you could see their skills building throughout the competition and you couldn’t fault their enthusiasm as they played. They all represented the school well and deserve a big well done.

“We had a really great time and I learnt not to hit it as hard. The best thing was that we came third.”

We also took 8 boys from Year 5 along to the Mini Tennis competition to act as umpires for the Year 3 and 4 competitions. They had some training by the School Sports Partnership beforehand to prepare them for the afternoon. The children were an absolute credit to our school and were commented on by other schools for their professionalism and politeness. They all did a fantastic job with such a fantastic opportunity which they can count as experience for any future leadership events which may come up. Well done boys!

“It was a really good day umpiring and I learnt that it isn’t easy. Although it was hard, I would do it again.” 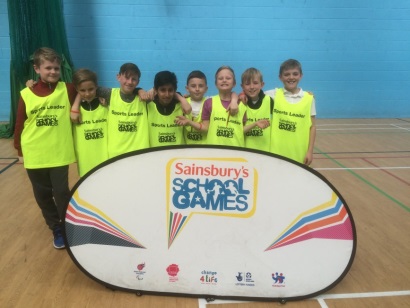 On Wednesday 27th April, 9 boys from Year 3 and 4 took part in a football tournament at Batley Sports Centre. We did extremely well and won all of the matches we played without letting in a single goal!

On Wednesday 20th April, 8 girls from Years 5 and 6 competed in a football competition against other local schools. To say the girls have never played together as a team before, you would have never have noticed. Each one of them put their all into the games, despite the heat, and their efforts paid off as they won the competition. The girls played 6 matches where they won 5 and drew once. They showed brilliant sports’woman’ship and helped each other out.

We are very proud of them all, well done girls! 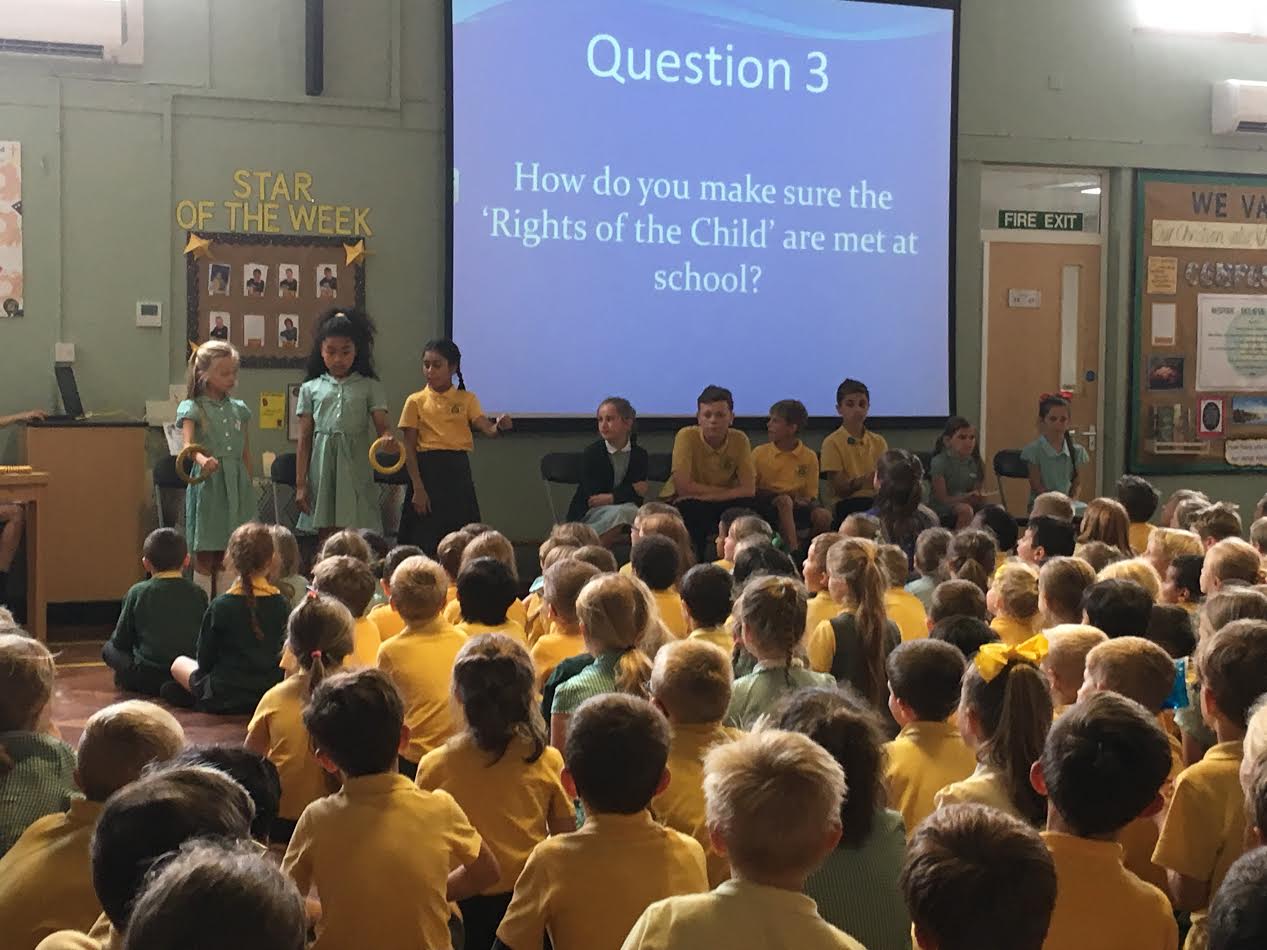 Both the children and staff had a great time today on the obstacle course and climbing wall, raising money for Sports Relief. Here are a few photos from today accompanied by the school choir singing "Power In Me."

Sports Relief 2016 from Windmill C of E Primary on Vimeo.

Here are some of the things the children had to say about it.

“My favourite part was going in the hoop, running and balancing on the bench.”     Freddie

“Even though I was really scared and I didn’t get to the top, the instructors were nice and helped me. It was really fun!”     Sam

On Saturday 12th March, the children who qualified at the Kirklees Final competed in the Final at the West Yorkshire Games. This time they were representing Kirklees against other districts within West Yorkshire.

The games, at Leeds Met University, began with an opening ceremony in which the children were a part of. After that, they competed by running a course around Beckett’s Park. The children did incredibly well and showed such great sportsmanship by not only cheering each other on, but also other children from Kirklees too. All children should be proud of their achievements and the effort they put into a tough competition.

A special mention should go out to Luke, who competed individually and came a brilliant 27th place out of over 100 runners in his category. We would also like to say a huge thank you to all the parents who gave up their Saturday morning, especially to stand in a muddy field, to make sure we had a team to take. It was a great morning and a proud moment for our School. Well done boys! 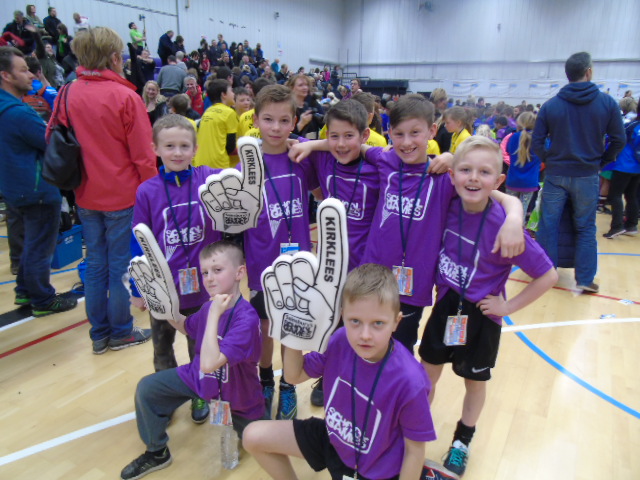 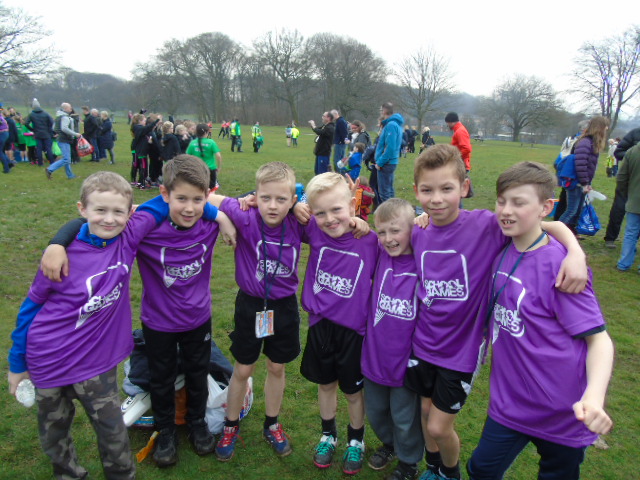 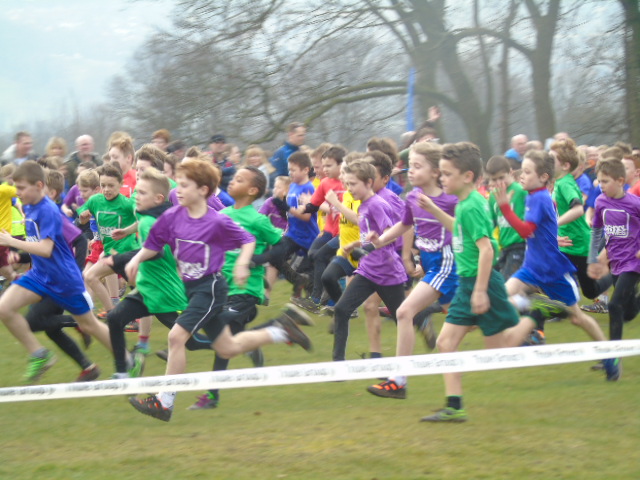 12 children from Year 3 & 4 went to Batley Sports & Tennis Centre to take part in an indoor athletics event. The children had a brilliant time and performed wonderfully - well done! Here's what they had to say.

Today we went to Batley Sports Centre to compete in some races. It was epic! We really enjoyed it. We all supported each other all the way! Rosie

The first race we did was sprinting and we did 1-2 laps. the second race we did was relay races. After a while we went upstairs to do throwing and jumping. I had a really good time competing. Lennon 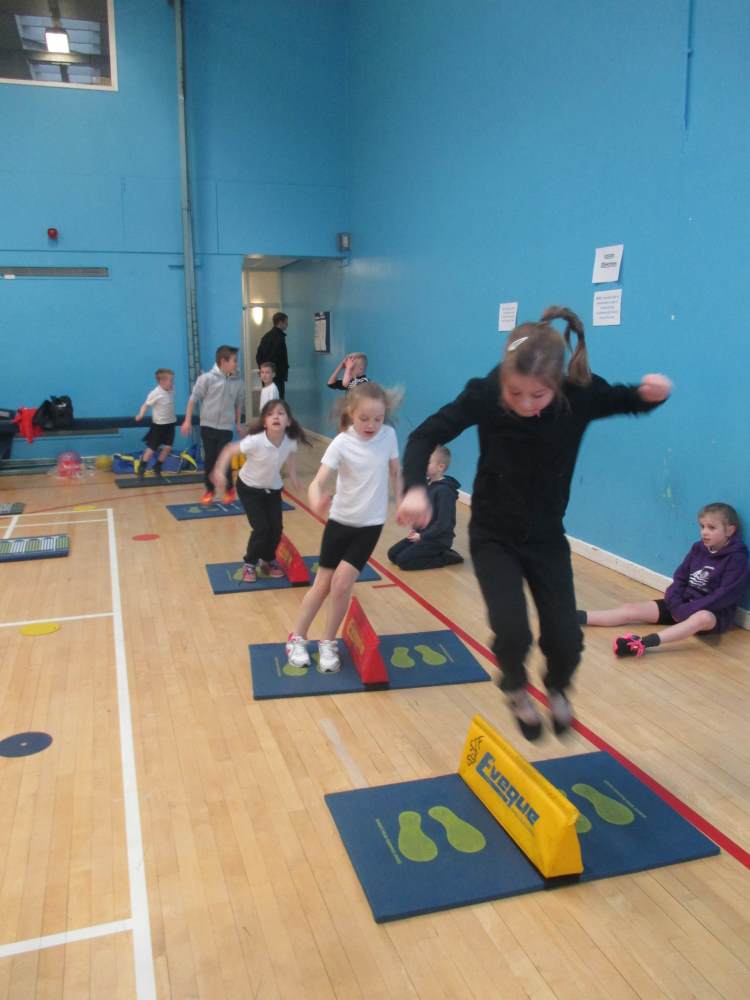 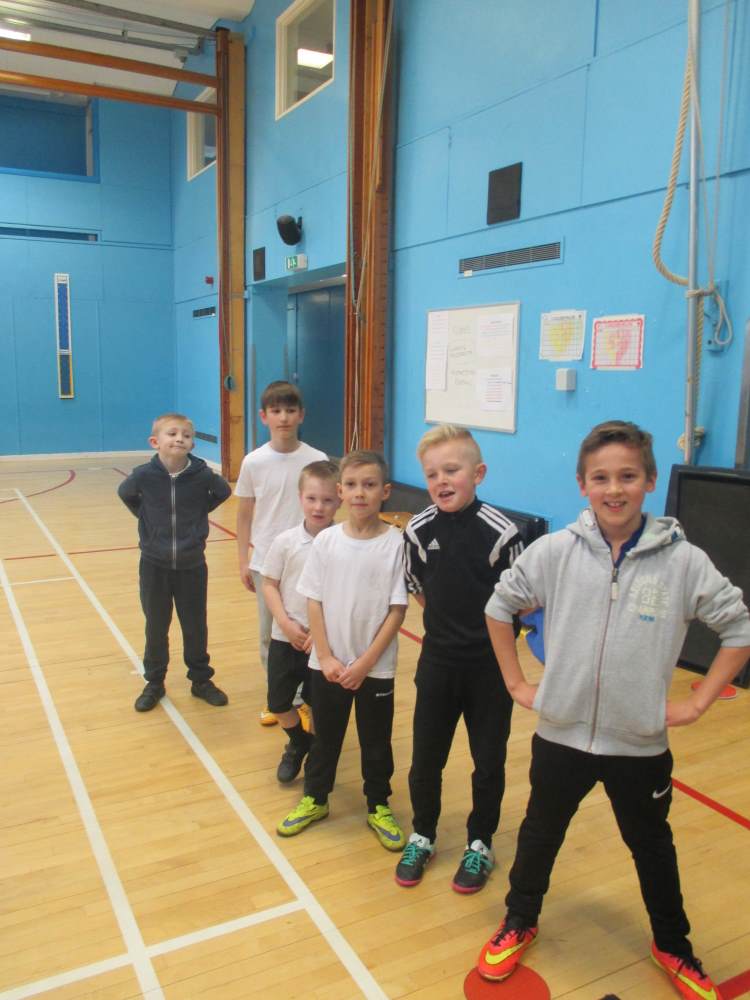 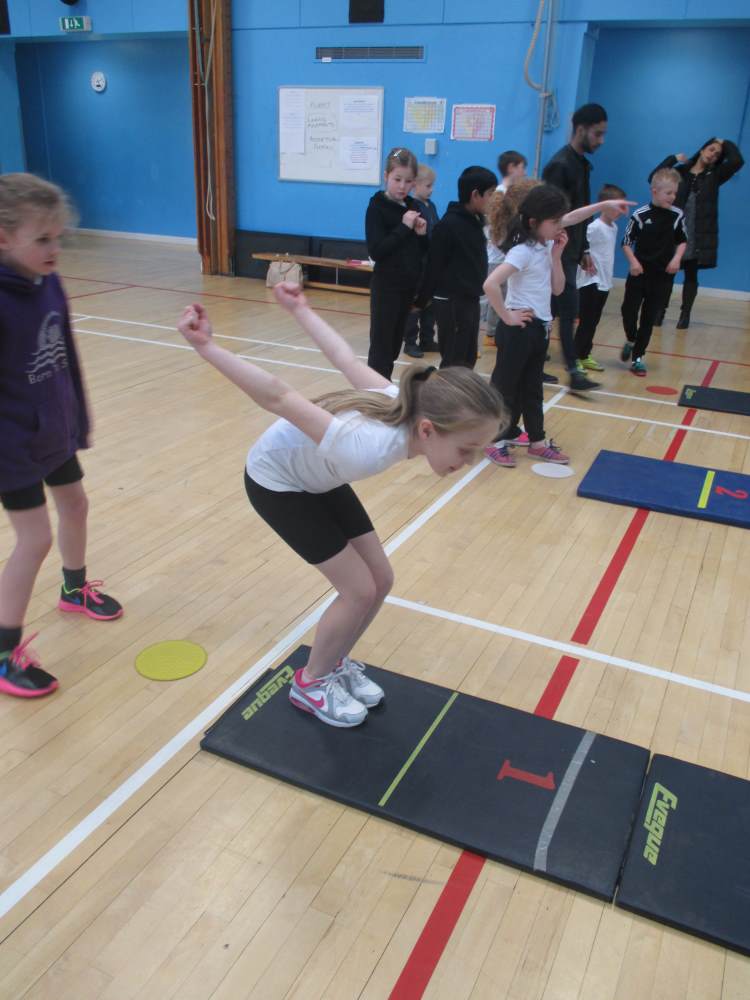 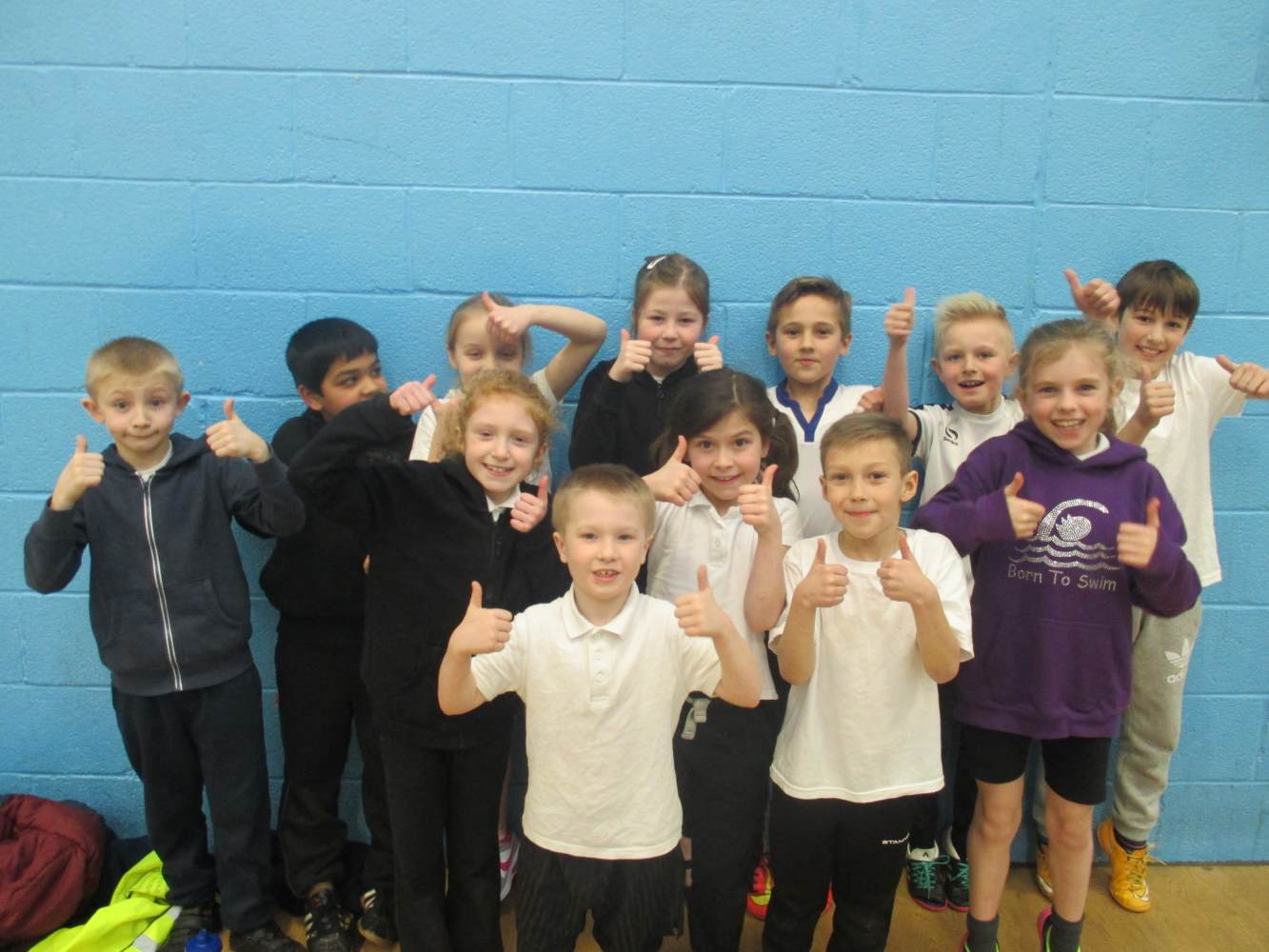 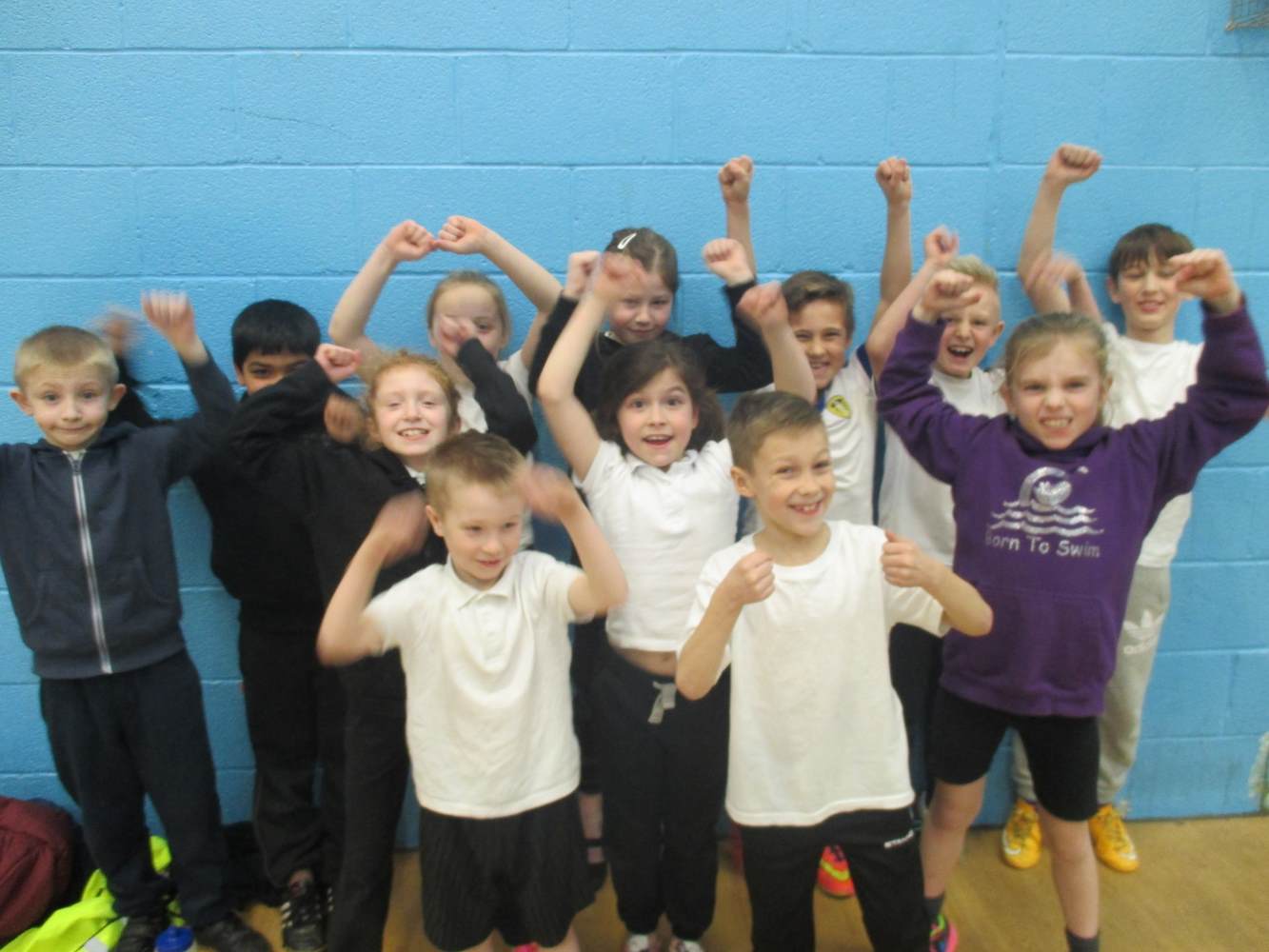 On Tuesday 2nd February, Mr Bedford and Miss Gall took 12 children from KS1 to participate in a sporting festival. The children took part in lots of fun mini games that focused on the on key skills such as: strength, balance and co-ordination.

I really enjoyed the activity where I was drifting around the cones on the mini-board. The whole afternoon was brilliant!            Eli

I enjoyed all of the games and I learnt lots about throwing and catching. It was so much fun!         Winnie 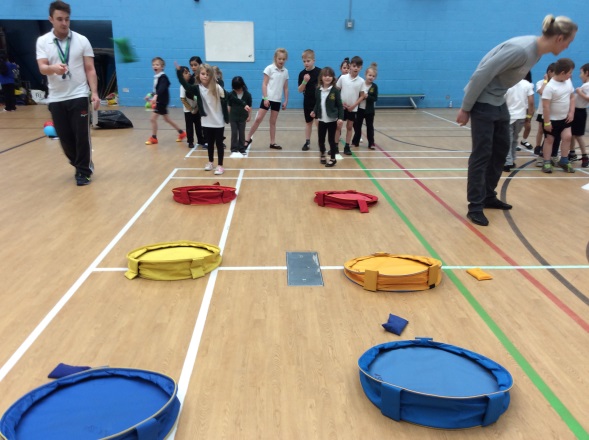 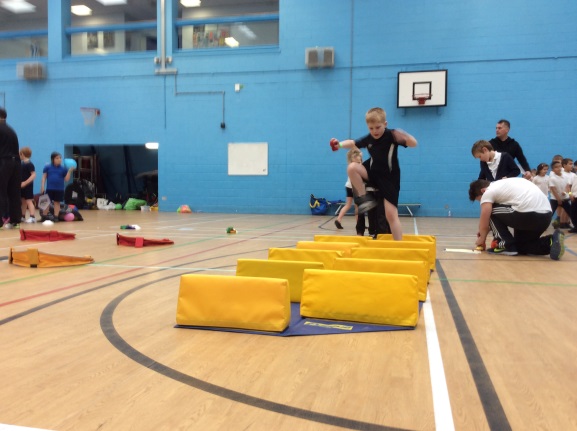 Twelve children from years 1 and 2 attended an athletics festival at Batley Sport Centre. The children participated in a variety of track and field events. This included: javelin, long jump, speed bounce, and racing other children. All of the children tried their best in each activity and even won some of the events! Well done to all the children who attended. 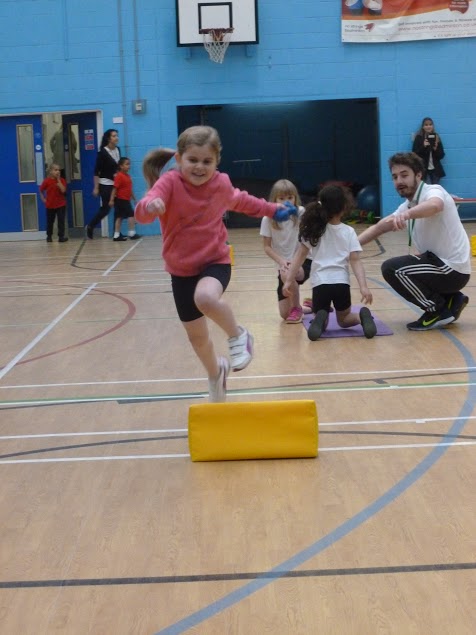 A team from years 5 and 6 went to Batley Sports and Tennis Centre to compete in an Athletics competition. The team found themselves in a rather unusual situation as there was only one other team who had turned up, which was also an incomplete team. However, their mood was lifted when they found that it meant they had automatically qualified for the next round of the competition in January! Nevertheless, the event went ahead and the children did themselves proud. They cheered each other on and gave it their all, taking part in track and field events. They showed great sportsmanship towards the other team by offering to join their boys’ team for certain races so they could take part in relays. We look forward to cheering our team on again as they go ahead to the next round. Well done Windmill. 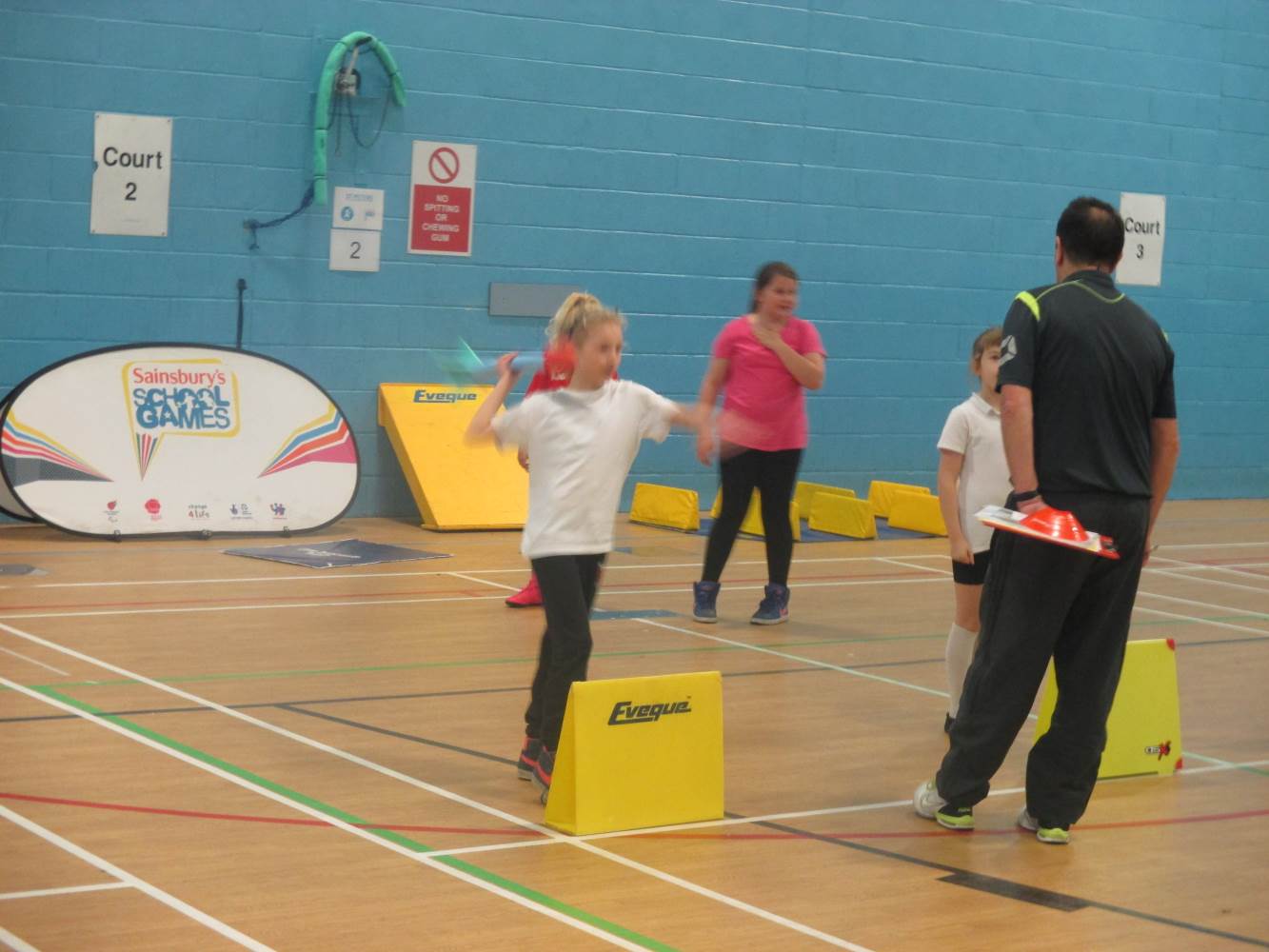 On Wednesday night, a team of 10 children went to Batley Sports and Tennis Centre to compete against other tough teams from around Kirklees. It was great to see how well they played as a team and rallied together especially seen as they spent most of their matches playing against the strong wind and rain.  They never gave up and put 100% effort into every match.  They played 6 games all together and won 3.  Unfortunately it wasn’t enough in the tough competition to qualify for the next round but we are proud of the effort and sportsmanship they displayed in representing our school.  Well done Windmill! 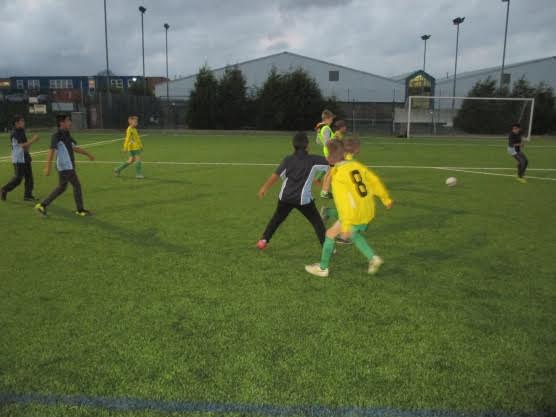 Huddersfield Giants led a 'special' assembly to KS2 on Friday - the children loved it! Here are a few photos. 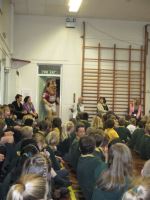 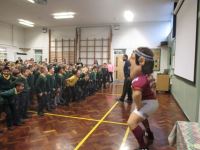 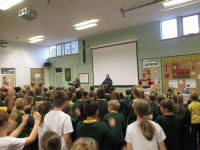 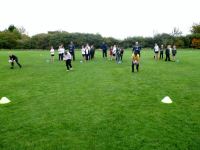 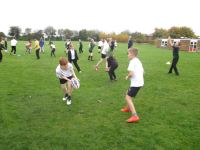 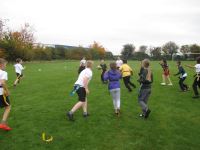 "I enjoyed rolling around whilst playing POW football, I scored lots of goals and that made my team happy."  (Fatimah)

We were very proud to have a whopping 67 children representing our school as they took part in the Kirklees cross country qualifiers at Batley Sports and Tennis Centre. The children were an absolute credit to the school and gave it their all. Spirits were high as the children were cheering each other on; we could not be outdone as another school attempted to out-chant us! The children did incredibly well, which led to 3 teams qualifying for the finals. Well done to everyone who took part - we wish the best of luck to the boys going through to the finals next week. 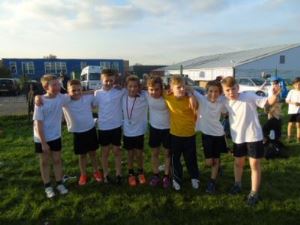 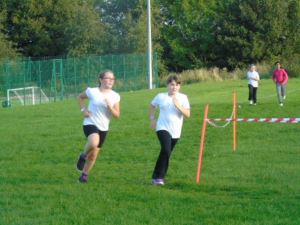